The default username for your Dlink DSL-2750U router is admin. The default password is admin (You can simply copy-paste using the buttons below) 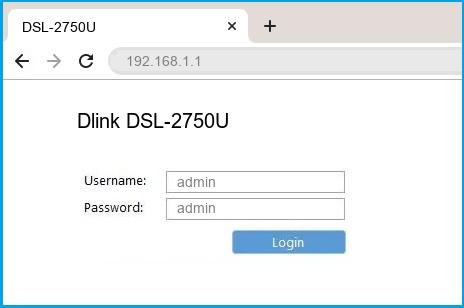 And no need to get your breathing rates high in case you have changed the username/ password of Dlink DSL-2750U and forgot them, as you can just reset the Dlink DSL-2750U router by press-and-hold the reset button with a clip for about 15 seconds.


Since, security of a network is vital, the first and foremost task is to change the Dlink DSL-2750U router Default Login and Password to something more personal and secure

The amount of protection directly depends on the password complexity, and the effort taken to protect that password of your Dlink DSL-2750U router

Give Password for your Dlink DSL-2750U router that you can remember (usability first). Of course, you can build a strong hash password with special character, numbers, greek and latin. But ultimately you will endup writing it on a sticky and putting it on the router which defeats the purpose. Here’s an example $lasttriptovegas0916

Another small suggestion (as it has no impact on security), is to change the Dlink DSL-2750U Default Wifi name (SSID) as it will make it more obvious for others to know which network they are connecting to.
Steps:
• Look for - SETUP(found in the menu bar at the top of page) , and click on it
• Look for - Wireless Connection(found in the left hand side menu bar), and click on it

Look for Network Name (SSID), this is the wifi name of your Dlink DSL-2750U Router. Don’t use your name, home address or other personal information (since this isn’t a Facebook status!) in the SSID name. (No Mr.Paul&Princy) Few funny wifi name suggestions: I’m cheating on my WiFi!, FBI Surveillance Van #594 (scares away stupid criminals), Lord of the Pings...
Once you enter the name for your network, you have to enable WPA2-PSK encryption on your Dlink DSL-2750U router. That’s the strongest encryption standard available for home networks.

Enter a new WPA Pre-Shared Key / Wifi Password – this is the password that you will use to connect to your home wifi. Keep it 16-20 characters and (please!) don’t use the same password that you used for Dlink DSL-2750U router login!

5.Few more settings that you can consider for your Dlink DSL-2750U router

You need or need not choose to consider this step; it is both obsolete and quite a hassle!
• You can consider MAC Address filtering for Dlink DSL-2750U router. But, you will have to essentially login to the router to add any new devices by feeding the device’s MAC address everytime you have a guest. Your date might want to check his/her emails, you know?
• There are a lot of resources in Internet asking to Disable SSID Broadcast on your Dlink DSL-2750U, but it’s more painful for you to connect every time than the hacker. Just forget, We don’t even recommend it

Just keep in mind to change the passwords often or at least once in every 6 months! on your Dlink DSL-2750U You do not want the safety you have worked so hard for to fail just because of ignorance, negligence or casual laziness! Time for a bulletin on the fridge, folks! We can remind you though? Enter your email on below! Nope, we’re not spammers!

Create a QR Code for your Dlink DSL-2750U wifi credentials, your guests can simply point their phone camera to the QR Code to connect to your wifi Create my Wifi QR Code

Passwords find a way to not work! Or, in most cases, users find a way to forget them! In either case, look up the “How to Reset the Dlink DSL-2750U Router to Default Settings” section below

Incase if you have changed the default username and password of Dlink DSL-2750U and forgot it, Please see “How to Reset the Dlink DSL-2750U Router To Default Settings” section below

How to Reset the Dlink DSL-2750U Router To Default Settings

Incase if you have changed the default username and password of Dlink DSL-2750U and forgot it, It’s more like magic, I’d say! Press the reset button with a pin or something that gets through the tiny hole, and hold it for about 15 seconds! (till you see all lights flickering) Your Dlink DSL-2750U router shall be reset in no time, and you can start from step 1 in this guide to set it back up

How to boost Dlink DSL-2750U Wifi and overcome connectivity issues:

The perfect spot does it all; be it romance or your router! To avail the best signal and network connectivity, make sure you keep your Dlink DSL-2750U router visibly and not facing the wall or behind the curtains

2.Find a Good Wireless Channel Instead of Auto on your Dlink DSL-2750U router

Auto channels might fail you once in a while; believe that you’re smarter than the Dlink router! Find a seamless wireless channel instead of what the router finds automatically. This would ensure that your signal does not interfere with that of your neighbors.
If you’re running a Windows-based PC, you can see what channels neighboring Wi-Fi networks are using.
-Press Start > type “cmd”. Open Command prompt
-In command prompt type netsh wlan show all
You will see a list of all wireless networks and the channels being used in your vicinity. instead of using “Auto” for the control channel, Pick the channel that has the lowest interference

3.Check the frequency of Dlink DSL-2750U

Check If Dlink DSL-2750U has dual-band, the more commonly used band would be 2.4GHz; however, switching to 5GHz would bring out better results! It depends on your device though; if you’re running an old lad, you might have to switch back to the conventional.

4.Hardwire gaming consoles / media streamers into your Dlink DSL-2750U instead of wifi

Gaming consoles/media streamers work better when connected through Ethernet cable of Dlink DSL-2750U; in fact, as you might not be moving your TV all over the house, why connect it to the Wi-Fi at all? The gaming consoles / video streaming devices flood the network with data. This means that if possible, you should consider hardwire (using Ethernet cable) the devices that tend to consume a lot of bandwidth. Although this can sort of defeat the purpose of having wireless network, but it can actually help your overall network speed of Dlink DSL-2750U if you can hardwire the bandwidth hogs.

Here is something important to note! On schedule, folks, reboot your Dlink DSL-2750U router! Though routers are built to constantly be running at all times, simple tweak like regular power cycling (a fancy way of saying unplugging the power cord and shoving it back up) helps with most issues. Rebooting your Dlink DSL-2750U can fix Internet connection problems, improve slow moving connections and resolve wireless issues altogether. Try unplugging your Dlink modem on a quarterly basis to stay proactive (Never reset, always reboot modem)